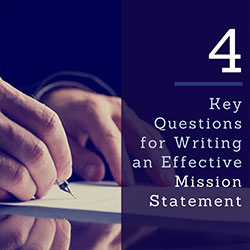 Several years ago, while working with the leaders of a family-owned business to set their strategies for the next year, I asked to see a copy of their mission statement. Looking confused and more than a little annoyed, the father said he thought it was somewhere around there in a framed picture, and the son felt pretty sure they had hired a company to put it on some mouse pads a few years ago.  But neither father nor son could recite the mission statement!  At one time, they had written and wordsmithed a mission statement, but clearly it no longer served as the foundation for their strategy formulation, nor apparently, even for their desk accessories. These owners, unfortunately, represent a common mindset.  Too often leaders assume that simply creating (or having a consultant create) and distributing a mission statement will accomplish something important. It won’t

As I explained to my clients, before taking any steps to formulate a strategy, they should have a clear understanding of the mission and of their nonprofit organization. A mission statement should play the same role in a nonprofit organization that the Holy Grail did in the Crusades. A mission defines your reason for being, the touchstone against which you evalu­ate your strategy, activities, and expectations for overcoming the competition. Without one, you will diffuse resources, enable individual units of the nonprofit organization to operate in silos, create conflicting tactics, and confuse customers, suppliers, financiers, and employees. Conversely, when you have a well-articulated sense of purpose, you will build a firm foundation that provides clear guidance for all significant decisions and establishes a point of reference for setting strategy and planning its execution.

Why do we exist?

Who are our best customers?

What do they expect of us?

Who would miss us if we went away?

In addition to defining the nonprofit organization’s identity, the mission guides its development over time.  Although it should be resistant to capriciousness, as the external landscape changes, leaders must tweak the mission statement as they recognize how to translate purpose into practice.

To draw an example from the for-profit world, in 1979 Americans experienced long lines at the gas pumps.  Gas prices soared (or at least we thought so then) to 86 cents a gallon while supply dwindled. The writing had been on the wall years earlier, but not everyone at the Ford Motor Company read it. At the time, Henry Ford II served as the chairman of Ford.  Lee Iacocca headed Ford US, and Hal Sperlich served as Iacocca’s deputy of product design.

Three years earlier, in 1976, recognizing the American car buyer’s need to respond to gas shortages, and certain that the American market would demand smaller cars, Hal Sperlich recommended that Ford downsize its automobiles, advocating smaller, more fuel-efficient cars to compete with foreign imports. Henry Ford disagreed.  He pontificated that he did not want a small, new, front-wheel-drive car because he didn’t think the market would change too much.

For years key leaders at Ford disagreed about the fundamentals of their mission. Iacocca and Sperlich agreed with each other about what they wanted the mission to be—to respond to customer demands—but Henry disagreed. He wanted to stick with the status quo. The stalemate led to dire consequences. Ford fired Sperlich, and the American car buyer punished Ford Motor Company.  Iacocca went on to write a bestseller entitled, Iacocca, but he could have just as easily called it I Told You So! As Iacocca foresaw, failure to make decisions based on the mission of the nonprofit organization would cost Ford dearly in the late seventies, yet more than 30 years later, nonprofit organizations still mistake the writing on the wall for graffiti when it comes to putting purpose into practice.

Every nonprofit organization is headed somewhere. Too often, however, that direction is not the result of a conscious choice. My not-for-profit clients recite the mantra, “No margin, no mission.” I counter with “No mission, no success.” The decision to write an effective mission statement offers the winning formula for that success. Answering the four key questions will seal the deal and keep you from the quagmire Ford found himself in.

Linda Henman, Ph.D. helps senior leaders reach strategic objectives by maximizing talent. She is the author of Challenge the Ordinary and Landing in the Executive Chair, among other works. She can be reached at 636.537.3774, or visit her website www.henmanperformancegroup.com