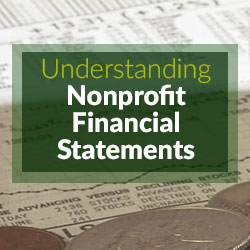 Whether you are starting a new job at a nonprofit organization, joining a nonprofit Board of Directors, or looking to donate money to a charity, it’s important to familiarize yourself with the unique way in which nonprofits present their financial statements.  Although most individuals have a general understanding of accounting and the accounting principles, it’s interesting to note that most of what we learn, especially in accounting courses, is generally geared towards for-profit companies, and, as you will see, the way in which nonprofits present their financial statements is a bit unique.

Let’s start with the Statement of Financial Position.  This statement is similar to the for-profit world’s Balance Sheet in that it lists the values of all the assets held by the organization and the values of all the debts owed, but the Statement of Financial Position also reports the organization’s net assets.  Similar to equity, the net assets section denotes the “value” of the nonprofit. This value, however, is further divided on the Statement of Financial Position into restrictions – either temporarily restricted, permanently restricted, and unrestricted net assets.  These classifications are used to segregate funding based on any restriction(s) imposed by each donor as to how the funds can be spent.  For example, if an individual donates money to a nonprofit organization and limits how the organization can use the funds, that money is considered restricted solely for that purpose.  Depending on the nature of the donor-imposed restriction, these funds may be permanently restricted (such as endowments that cannot be spent) or temporarily restricted (such as funds that are to be spent, not held, on a specific project).  On the other hand, if an individual donates money to an organization but never specifies on what or how the organization can use the funds, these funds have no restrictions and are therefore classified as “unrestricted”.  It is interesting to note that occasionally funds are restricted internally (i.e., management or the Board of Directors decides to restrict how some of the unrestricted funds are to be spent).  The funds are still considered unrestricted for reporting purposes but the internal restriction is noted in the Statement or in the accompanying notes (such as in the example below whereby the Board of Directors restricted $1M of the organization’s unrestricted funding for a given purpose). 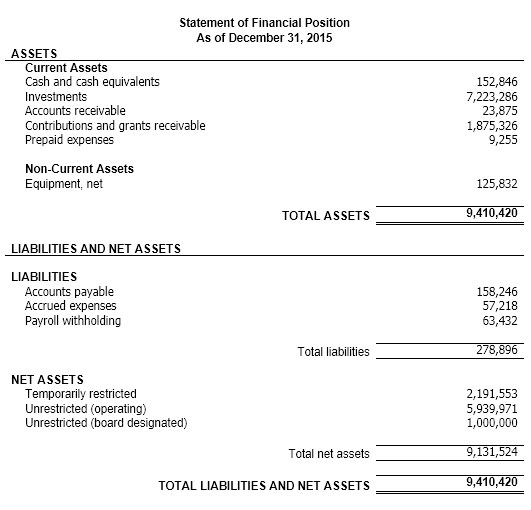 In addition to segregating net assets based on restrictions, the Financial Accounting Standards Board (per Statement of Financial Accounting Standards No. 117) requests organizations to further report — either in the net assets section of the Statement of Financial Position or within the financial statement notes — any assets that are donated to the organization with “stipulations that they be used for a specified purpose, be preserved, and not be sold” (i.e., land or works of art) or assets donated with “stipulations that they be invested to provide a permanent source of income” (i.e., endowments).

The next financial statement that you will see presented after the Statement of Financial Position is the Statement of Activities.  This statement is in lieu of the Income Statement that is used by for-profit companies, and it reports the change in permanently restricted, temporarily restricted, and unrestricted net assets.  As shown below, this is accomplished by listing each net asset fund in a separate column.  Expenses, which are by nature considered “unrestricted” even if they were spent with restricted funds, will appear solely in the unrestricted column, and the revenues tied to those expenses incurred using restricted funds will appear in the line item “net assets released from restrictions”.  Accountants will typically state that those revenues were “released” from their donor-imposed restrictions once the expenses were incurred, thus the Statement of Activities will present a decrease in these restricted funds and an increase in the unrestricted funding for the same amount in the revenue section of the statement (as seen in the example below). 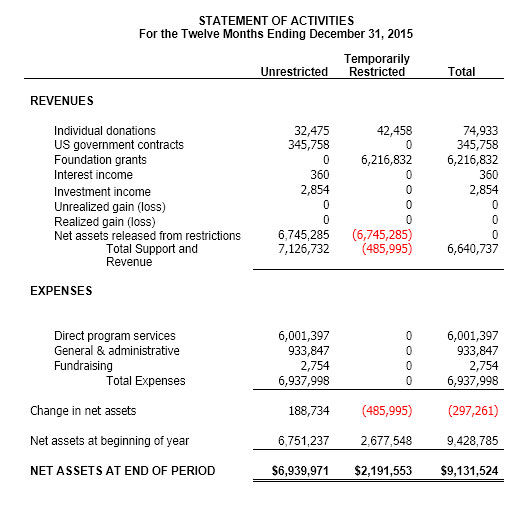 Another financial statement produced by nonprofit organizations is the Statement of Cash Flows, which is produced following the same procedures used by for-profit companies.  This statement shows the inflow and outflow of cash within the organization.  As shown in the sample statement below, the cash flow starts with the change in net assets – which equals the amount listed on the Statement of Activities.  The changes in the balance sheet accounts are then added to this amount to derive at the total increase or decrease in cash.  When this total amount is added to the cash balance at the beginning of the reporting period, you will end up with the current cash balance, which will match the amount listed on the Statement of Financial Position. 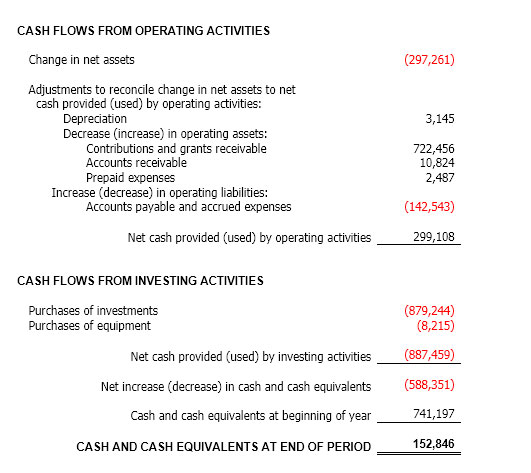 Finally, nonprofits will also produce a Statement of Functional Expenses.  This statement will detail the expenses incurred during the reporting period and allocate it by program services and support services.  Best practice, although not required, is to break-out the program service costs by the organization’s various programs and list the expense categories from highest to lowest.  Program services are considered “direct costs” as they are the mission-related activities performed by the organization, while support services include such costs as fundraising, overhead, management and/or general administration. 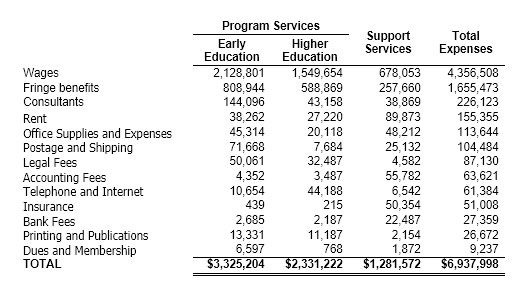 Again, all of the financial statements are connected.  For the Statement of Functional Expenses (as shown in the example above), the total expenses will equal the same amount reported on the Statement of Activities.

James Willis is a nonprofit finance and operations executive who has worked in the nonprofit field for more than 15 years, holding such positions has Chief Financial Officer, Controller, VP of Finance, Director of Finance, and Budget Manager. He is also the Director of an outsourced accounting and financial services firm specializing in nonprofits. Connect with James on LinkedIn www.linkedin.com/in/jamesawillis