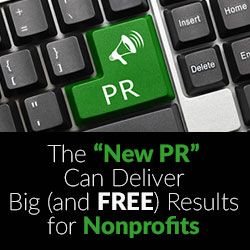 Public Relations as a discipline has undergone significant changes in the last 20 years. Gone are the days of mailing press releases and placing dozens of calls a day to a long list of reporters that might possibly be interested in your story (truth be told…they mostly hung up on the callers). Though some lament the changes since they have mostly resulted in fewer face-to-face or even voice-to-voice communications, the reality is that used effectively, new technology has advanced our ability to successfully execute a PR campaign. PR strategists can now track the success of messaging, what reporters are writing about (how often and for whom), who is reading the content (where and when) and much more. There is a new software application being launched what seems like every month to help PR professionals do their job more efficiently. But, the traditional foundation of PR remains the same – spread the message in earned placements.

Given the challenges that nonprofits face – staffing, budget, resources – PR is one of the most effective and efficient ways for a nonprofit to spread its message. Despite what many communications professionals learned in college (hours and hours of lectures…ugh) most PR is not about crisis communications or promoting a household brand. PR is about communicating your organization’s message to the people that are most likely to communicate it to the audience you most care about. It pretty straight forward. PR isn’t rocket science, but it is knowing what to say, how to say it and to whom you want it said. And, through measurement, making sure all of that is getting through to your audience.

PR is an elegant use of messaging and tools carefully developed and executed to reach your audience. However, before an organization can begin “communicating,” it must first determine who it wants to reach. Who is the audience that can most positively impact the organization? Next, develop the message/messaging that will best resonate with that audience (for example: determine if your messaging should be formal, casual, quantifiable data, emotional, etc.). Once you’ve tackled those – audience and message – the research begins. If you don’t already know the reporters, bloggers, or influencers that are writing about and talking about your organization and its key issues (don’t worry – most people don’t know or only know a few), then you need to do your research and develop a list of those contacts. Once your first steps are complete, it is time to start cranking out content and putting it to work!

There are a variety of content tools that PR professionals use to communicate an organization’s message to the media and the broader target audience. They include:

Press Releases – despite what some reporters say, the press release is not dead. However, it has evolved. Short news announcements that briefly outline the news are far more preferable than long, detailed press releases often used in the past. Graphics and photos are also always appreciated. Even better news for nonprofits is there are a wide variety of free press release distribution services so the cost of sending your announcement to the media is zero.

Media Advisories – these aren’t dead either and as “mini-releases” they are shorter, who, what, when, where-style announcements that are ideal for announcing events.

Social Media Content – this covers a great deal, but the good news for nonprofits is that content developed for social media can be re-purposed in a wide variety of ways. Not repeated, but reworked so similar content can be used for blog posts, Facebook posts, tweets, pins, etc.

Email Pitches – since a large number of reporters are now covering several beats and media outlets are understaffed, they tend to largely prefer pitches via email (vs. phone calls). The content that is being used for social media and press releases will also likely be the basis of a good email pitch. The keys are to make it short, sweet, compelling and actionable. Sell your story/issue/concern in a few sentences and ask for the next step (specify the action you want them to take or the follow up action you plan to take). Above all…be professional and human.

Phone Pitches – much of the approach that works in email pitches, works in phone pitches with the important addition of when you get them on the phone, show reporters the courtesy of asking if they have time to speak with you.

Issue Statements – nonprofits are in the ideal position to make statements about issues being discussed in the media. The key is to develop and distribute the issue statement in a very timely manner. As soon as news breaks that the organization can speak to in a meaningful way, draft a quick statement to that effect, offer the name and title of the person that can be interviewed on the topic and distribute it to the media (this can be done via press release distribution platforms or email).

Awards – don’t miss any opportunity to be recognized for your great work. Although there are some paid awards that wouldn’t be ideal for a nonprofit, there are many free ones that all you have to do is complete the nomination form. And, if you win an award, don’t forget to tell everyone about!

With smart planning and the commitment to doing it right, PR is an incredibly effective tool for nonprofits to get their message out. Don’t miss the opportunity to put it to work for your organization.

Virtual Fundraising: Tips for Moving In-Person Auctions Online
Draw on the Crowd: How Not-for-Profits Can Take Advantage of Crowdfunding
4 Ways To Fail at Fundraising

Leah Wilkinson is co-founder of WilkinsonShein (WS), a strategic, full-service communications firm with a passion for innovation, technology and sustainability. WS is the proud PR and marketing partner of nonprofits and the organizations and events that serve them, helping them communicate their message to the media and other influencers. When not writing, strategizing, pitching or running her business she can be found wrangling her husband and two kids on any manner of adventures, large and small. #wilkinsonshein.