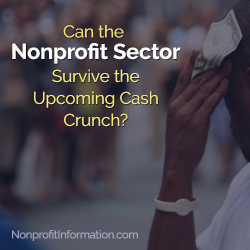 The nonprofit sector is used to intermittent income. Individual donations and government grants rise and fall with the economy. Uncertainty is at heightened levels however, as crowdfunding for individual causes and impact investing compete for “giving” dollars. And above all of this looms the Tax Cut and Jobs Act (TCJA) of November 2017 that could slash individual giving. U.S. NGOs need to be pro-active in creating a form of “battle plan” to cope in adverse circumstances.

While the magnitude of the TCJA is still unclear, the sector cannot afford to wait to act. The biggest threat of the TCJA is the doubling of the standard deduction, which will reduce the number of taxpayers who itemize deductions and negate the value of a charitable tax break. Significant numbers of taxpayers relied on the break when determining both whether and how much to donate. It is estimated that the new law will cut charitable giving by about $16-$24 billion a year from a total of about $390 billion, and that the number of households claiming an itemized reduction will fall from 37 to 16 million in 2018. Individuals and households are more likely to give to smaller NGOs, who can less easily cope with funding shortfalls. This will compound the effect of the reduction in giving.

Some taxpayers may find workarounds. Some may donate larger sums once every two years, or open donor-advised funds. People may also increase IRA donations (which are not deductible but count as a required minimum distribution), charitable gift annuities and charitable remainder trusts. Despite this, the tax bill will likely wallop many nonprofits, especially smaller ones. Less certain and more “jerky” inflows can mean more closures, fewer programs and reduced ability to apply for grants and loans. The resultant increase in concentration in the NGO sector is perhaps one of the most damaging effects of the TCJA.

Back to that battle plan…

Tepid U.S. wage growth rules out relying on individual giving as a way forward, leading some to look at more unusual alternatives, like NGO-led crowdfunding campaigns (if you can’t beat them, join them). However, donor fatigue and resource intensiveness may rule out crowdfunding. A better option might be to use rebound of the real-estate market and the aging population as a platform to push legacy programs. Growing revenue from service fees, venue hire and merchandising will continue to be important, though some local markets may not be robust enough to support much growth in this area. Collaboration on grants and contracts is also a possibility, especially as a way to ensure survival of the smaller NGOs.

Obviously, a government expansion of tax relief options would also help. A possible solution may be to create something akin to Canada’s First-Time Donor’s Super Credit that was introduced in 2013 and allows new donors to claim a tax credit on donations. The Canadian legislature is also considering a “Stretch Tax Credit for Charitable Giving,” which would apply to incremental donations to prevent the cost to Treasury from donations that would have been made anyway. 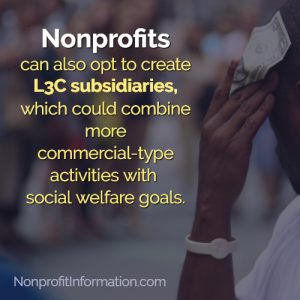 A more extreme response would be for more charities to become low-profit limited liability companies, which are social enterprises that combine the legal and tax benefits of LLCs with the social benefits and goals of nonprofits. In the U.S., state law governs L3Cs. In particular, they are designed to allow private foundations to use tools like loans and equity instead of grants, which could increase the amount of private investment in the nonprofit sector. L3Cs themselves are not eligible for tax exemption, but are generally taxed as pass-through entities, while the for-profit investors are subject to tax on income received. This allows L3Cs to expand “commercial” offerings including things such as cause-related marketing, sponsorships and “knowledge sales.” NGOs can also opt to create L3C subsidiaries, which could combine more commercial-type activities with social welfare goals.

A potential snag may be that the IRS appears to be “resurrecting the obsolete, discredited commerciality doctrine, which says that a nonprofit cannot be charitable if it engages in activities, which are primarily commercial, even if the activity benefits only the general public or a charitable class”. This was abandoned years ago due to its dampening effect on innovation. The recent IRS approach may threaten a range of charities including community health centers, university bookstores, the NCAA. All of these offer services that could be perceived as competing with private business. NGOs might therefore be safer if they set up a wholly-owned trading subsidiary, with no limits on the type of services they can provide. They would have to pay tax on profits from these subsidiaries but after that the trading subsidiary could give all its remaining profits to the NGO as a charitable gift.

As government budgets are cut, there is a greater need than ever for nonprofits to “fill the gaps.” Sadly, their ability to fund this expansion is also being threatened and survival will depend on the availability of new structures such as L3Cs and an increase in fund-raising tools such as merchandising. What were once seen as alternative may soon become the norm…