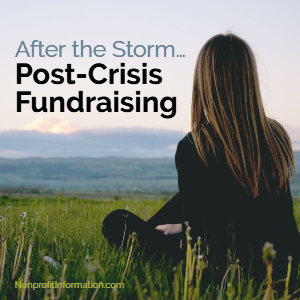 The COVID-19 global health pandemic hit the U.S. harder than originally anticipated. More than eight weeks into self-quarantine and physical distancing mandates, many non-essential businesses across the country still wonder when and if they might reopen. The crisis has bumped unemployment to record levels. Economic forecasts are not optimistic for the near future, and across the nation individuals and businesses are rethinking investment and operational strategies. Even nonprofits that work with those directly affected by the epidemic are operating on Plan B, and many more whose work is considered peripheral to the health emergency are concerned their donors will be more focused on crisis-management philanthropies…if they’re thinking about philanthropy at all. Other than emergency relief fundraising, many think now is not the time to look for donations.

However, some fundraising experts say those nonprofits might want to reconsider; in the midst of a crisis – and immediately after, when the dust has begun to settle – there are tactful yet effective ways to seek support.

“It’s important to remain in touch with donors in times of crisis. Keeping supporters informed of your organization’s response tactics, as well as checking on their well-being, goes a long way toward good stewardship,” says Peter Hathaway, senior vice president of the Andrews Foundation in Boston, a nonprofit that supports the arts. “In traumatic times, unless your charity works with populations directly impacted by a crisis and you’re seeking aid for emergency relief, fundraising isn’t likely to be very successful or welcome. But that doesn’t mean your work isn’t important, and as the storm subsides there are creative ways to re-engage interest in your mission.”

An animal rescue and shelter might not be foremost in people’s minds when considering how to support charities during and immediately after a global health crisis. But the website landing page for New Jersey-based St. Hubert’s Animal Welfare Center contains a prominent link to the organization’s COVID-19 updates, as well as practical tips for pet owners to prepare for continued pet care should they become ill. Among the list of ways to help the organization, they’ve included animal safety advice, applications for animal fostering and adoption, a supplies drive, and direct contributions.

Save the Redwoods League, a 102-year-old nonprofit that works to protect and restore California’s redwood forests, offers visitors to its website the opportunity to send a free e-card to a loved one. The organization emphasizes the importance of human connection during this time of isolation, even though their focus concerns environmental issues. Although their mission isn’t directly related to the economic and social crises created by COVID-19, they’ve managed to stay relevant and show their concern for the emergency at hand while keeping on their donors’ radar.

Financial advisers and attorneys note the COVID-19 health crisis has spurred people to think about their plans for the future. California estate attorney George Gordon says his firm has seen an uptick in individuals setting up wills and end-of-life directives.

“As this crisis has progressed, interest in estate planning has steadily increased,” he says. “It may sound morbid, but it’s actually very responsible. People of all ages and income levels have been eager to put their finances in order. That includes philanthropic planning.”

Advisers like Gordon are currently working with clients remotely, but reports indicate that since the onset of the epidemic, business on self-guided online estate planning platforms has risen nearly 150 percent. Husband and father David Matthews of New York says the realities of COVID-19 motivated him to stop procrastinating and create a will.

“I was hearing about perfectly healthy people contracting this potentially deadly virus and realized I needed to be prepared to protect my family,” he says.

He turned to a free online will preparation program to put his estate in order, including bequests to the family’s favorite charities. Having donated to several causes for many years, Matthews wanted to ensure their ongoing support well into the future.

By including legacy giving in a list of donation options, a nonprofit can plant the seeds for estate gifts now and revisit the concept at greater length with donors later.

Hathaway says, “No one wants to have a conversation about their mortality, especially at a time like this, but by subtly including planned giving in a collection of giving vehicles you can address the issue from the sidelines. As long as you approach it as one of several options, it’s easier to talk about legacy giving.”

The benefit of planned giving is that it can be done without touching any money today, so legacy gifts are painless, even for donors who feel uncertain about their income and investments. With thoughts of the future topmost in people’s minds, now is the perfect time to gently remind donors of your charity.

No time like the present to connect with donors.

Kenneth Alexo, vice president for development and alumni relations and president of the foundation at the New Jersey Institute of Technology, believes fundraising, including planned giving, shouldn’t be put on hold in times of uncertainty. He cites how nonprofits responded to past crises, such as September 11 and the economic crash of 2007-2008.

“The nonprofits that came out of the crisis more financially intact were the ones that said their mission was too important to stop fundraising,” Alexo explains. “They simply modified their approach. Maybe they halved their major gift solicitations or exercised more discretion about whom they solicited, but they still stayed in touch with donors. Once the crisis was over, these nonprofits hit the ground running without missing a beat.”

By contrast, he notes, many organizations that thought they were “doing the right thing” by halting fundraising efforts altogether discovered later that this tactic didn’t work and were often less successful when they did resume fundraising.

That said, Alexo acknowledges most nonprofits will come up short against the fundraising goals they set at the beginning of this year. With unemployment soaring, an unstable stock market, and an uncertain future, people will be more thoughtful about their money.

Some economic experts are cautious about how donors will respond to the COVID-19 crisis, in large part because the true impact on the economy has yet to be seen. History has shown that most donors who give prior to a recession continue to donate at approximately the same capacity during and after a downturn, though it may be harder to attract new donors unless a nonprofit is working directly with those affected by the crisis. For COVID-19, that’s the health and human services sector. But economists also caution that high net worth donors whose investments are currently in flux might want to sit things out for the time being until they know where the stock market will land.

Naturally, health and safety are the number one concerns in any emergency, and every charity must decide what approach works best for its mission and donor base. But nonprofits whose operations rely on individual donations should stay attuned to fundraising trends, especially if their organization’s work is tangential to the crisis at hand and not receiving much attention. Once there’s a light at the end of the tunnel and a return to ordinary life post-disaster seems imminent, fundraisers shouldn’t feel uncomfortable connecting with donors to explore ways to support their charity.