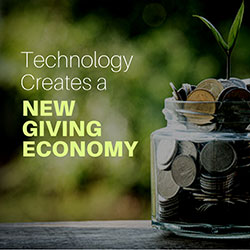 Technology can be very good for the nonprofit world. While technology has fundamentally changed the way we do business, the world outside of the for-profit sector has just recently caught on to its benefits. Some tech phenomena have already successfully infiltrated the nonprofit sphere, including the use of Software-as-a-Service (SaaS) to improve donor relations and other daily business functions, or crowdfunding for fundraising purposes. While existing technologies remain useful for many, the next wave of using technology for good will be in the peer-to-peer giving model.

Becoming prime time in the corporate world in the early 2000s, SaaS took hold in the nonprofit space in the last 8-10 years. The very nature of SaaS made it ideal for the nonprofit sector: It’s easy to use, low cost, and avoids integration challenges that often come with on-premise databases. It was also readily adopted because of its ability to help groups manage donations and track individual donors.

For example, Room to Read, a global organization transforming the lives of millions of children in low-income countries by focusing on literacy and gender equality in education, relies on SaaS application Salesforce for project allocation, reporting and tracking. It helps their global teams track at scale for both the project and donor side, enabling them to make more meaningful connections and retain existing donors.

The next wave of technology modeled perfectly for nonprofit use was crowdfunding. Making its first appearance in the late 2000s, nonprofits quickly turned to Indiegogo and KickStarter to help fund their initiatives and programs. Crowdfunding caught on in the nonprofit world because it was an easy platform for anyone to access and donate to. With online payments becoming standard, it took the hassle out of mailing a check or donating in-person. Also, the collective community aspect allowed hundreds of people to work together to reach a common goal.

In 2014, Code.org launched its ‘Hour of Code’ program, with a goal of raising $5 million on Indiegogo to train 100 million students to code. They also created a viral video starring Mark Zuckerberg and Bill Gates for the campaign. It was the most successful Indiegogo crowdfunding campaign of its time, quickly surpassing its goal and showcasing the power of collective online donations.

While SaaS and crowdfunding have clearly made their mark on the nonprofit sector, the next technology that will be adopted in the nonprofit sector is peer-to-peer sharing. First emerging in the late 2000s and becoming mainstream in the last three years, the for-profit sector has already seen runaway hits in the peer-to-peer economy with startups like Airbnb, Uber and Zaarly. So what if this model was applied towards social good?

Elevating the sharing economy to the giving economy, nonprofits can tap this concept to allow donors to connect directly to those in need. Users are already familiar with peer-to-peer giving technology and it is easy to use and implement at a broad scale. Also, it is appealing to a millennial’s mindset who wants to help or receive help at the touch of a button.

Additionally, this model takes crowdfunding one step further by creating a meaningful one-to-one connection. Instead of being one of many, a donor can foster a direct relationship with someone in need and feel more satisfying for the donor. Donors who give in this way often receive immediate and direct feedback from someone they have helped, bringing a rush of emotions knowing they have impacted someone’s life. This is what turns random acts of kindness into a normal habit.

Out of all the nonprofit sectors, social services can benefit the most from peer-to-peer giving since it fosters a more dignified way for people to seek help. Because peer-to-peer giving is non-conditional and not predicated on paperwork, rules about sobriety, lifestyle, or impersonal prioritizations by well-meaning social agencies, those who need help can simply receive it from another community member. For instance, if a homeless person requesting a tent has to wait six months for social services paperwork to go through, it can mean they have to sleep outdoors, in the rain, in fear for personal safety, for another half a year. Peer-to-peer giving can drastically shorten the time to receive something critically needed for survival from months to days or even just hours.

The tech world isn’t just in a Silicon Valley bubble anymore. Technology has helped nearly every industry around the globe develop new product or services. With an ever-expanding influence, we have the opportunity to capitalize now on these innovations and benefit the greater good. Next time you spend 10 seconds requesting an Uber, imagine spending the same amount of time to help someone in need. Donating money, supplies or services to anyone, anywhere, with a single click.

How to Apply Millennial Engagement Insights across the Broader Nonprofit Workforce
Three Steps to Address Endowment Spending in the Time of the Great Pandemic
Is Your Nonprofit’s Branding Strategy Fatally Flawed?

Jonathan Sposato is the founder of the nonprofit WeCount, CEO of PicMonkey, chairman of GeekWire and is a serial entrepreneur and angel investor. He previously cofounded Picnik in 2005 and founded Phatbits in 2004, which were both acquired by Google. He formerly worked at Microsoft as part of the original Xbox team.