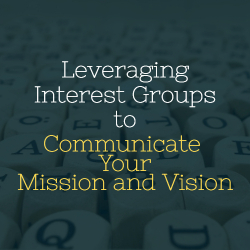 No money to get the word out on your nonprofit’s initiatives? No problem. Leverage your allies.

Consider that your stakeholders, that is, donors, clients, sponsors, board members, staff and volunteers that are involved with a nonprofit, become spokespeople for it simply by their association with the group. Making the most of their individual and collective voices is a smart and economical way for nonprofits to spread the word on who their organization is and what it’s doing.

One way for a nonprofit to maximize its supporters’ potential impact is to encourage them to talk about and promote the organization and its efforts during their interactions with people outside of the charity, such as with family, friends and colleagues. Another means is to recruit available staff and volunteers to participate in opportunities on the organization’s behalf where their presence, and possibly voice, could heighten the nonprofit’s visibility, such as through business happenings and networking events, social media platforms, community outreach initiatives, awards programs and print, radio and televised media opportunities.

Remember, too, that while people involved with a nonprofit may be able to promote the organization in general terms, their message will be more effective if it’s aligned with a specific cause or initiative. Recently, for instance, one of Astor Services for Children & Families’ supporters used crowdfunding to alert others about a marathon she was running to benefit the organization. The initiative also was posted on social media and in the news media, helping her to surpass her goal by more than $1,000.

The idea is for organizations to start their outreach with a core group of stakeholders from which to branch outward, allowing the same message to be conveyed through many different means, in the hopes that it goes viral. After all, the more communities’ businesses and residents connect with a nonprofit, the more likely it is that they’ll take up the organization’s cause through financial contributions, volunteerism and other means.

At the same time, nonprofits should look for a balance in what is shared about them, how it’s communicated and how often. Social media, for instance, provides an easy way to communicate news in a readily accessible medium, but it can be overdone, causing people to bypass posts instead of reading and sharing them. Still, it can be difficult to know how much is too much. Data analytics on social media posts can be helpful in showing what’s been most effective in terms of opened, shared and commented news. Personal preferences can also help guide a nonprofit on what’s a suitable amount of news to share, including specific supporters’ feelings on what’s appropriate.

It’s also important to keep in mind that different demographic groups respond to news items and media outlets differently. That means it’s essential for nonprofits to know how to direct their messages to appropriate audiences, what the interests of that group are, and what they’d be likely to react to and read. It’s also key for nonprofits to know who, of their supporters, are the best people to deliver the organization’s news to each of their audiences. Some supporters, for instance, are happiest and most effective when they serve as ambassadors and help to fortify connections. Others may be more inclined to take the role of askers, where they ask probing questions of others, or serve as an advocate or advisor. Knowing what each ally’s comfort level and strength is can fortify a nonprofit’s position, as can being responsive to incoming interest in its cause.

Something else for nonprofits to think about is the general public’s knowledge of their cause. Autism, for instance, is a national issue that is so largely recognized that local nonprofits dedicated to the issue might find that minimal funds for their outreach efforts suffice. Other, lesser known groups that don’t have that kind of movement might need to dedicate more funds toward their effort to connect with others.

By utilizing their allies’ reach, nonprofits can increase the span of their marketing efforts at a minimal cost, helping ensure that more of their money goes directly into their programs and services. For many, however, as their organization grows and expands its services, so will the pool of people it serves, necessitating a greater investment for its outreach programs to connect with target audiences. As always, it’s a matter of balance.

Big, small or no budget, effective outreach efforts require ongoing attention to successfully reflect the regular changes that a nonprofit and its communities experience. At Astor, we constantly go back to the data and hold up the mirror to see what’s working and what else we can do.