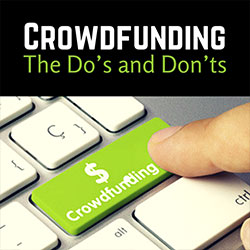 Crowdfunding is exploding in popularity in both the for-profit and non-profit space. According to a Massolution report, the crowdfunding industry is doubling, or more, every year and will far surpass the yearly average of $30 billion raised from venture capital by the end of 2016.

Currently, the most successful campaign of all time on crowdfunding platform GoFundMe supports the victims of the Pulse nightclub shooting and their families. So far, more than $7 million has been raised for Equality Florida, the largest civil rights organization dedicated to securing full equality for Florida’s LGBT community.

Crowdfunding allowed the organization to quickly solicit donations and get much-needed help to the victims of this tragedy. Funding could have been secured in other ways, but crowdfunding allowed the organization to drastically increase their donor base and likely took significantly less time, manpower and money than more traditional forms of fundraising. The campaign also garnered more than 239,000 social media shares, increasing the reach of the nonprofit’s message.

Any nonprofit can start a crowdfunding campaign, but to do it effectively keep these do’s and don’ts in mind:

Do: Clearly Explain the Cause

The first step in any successful crowdfunding campaign is to outline what the specific cause is, why it’s important and where the money will be going. Be completely transparent and get specific (i.e. $30 will fund a child’s education for one month). Include details about your nonprofit, its history and the results of past fundraising campaigns as well.

Laws regulating crowdfunding and other fundraising efforts vary by state. Skip the state registration process allowing your organization to solicit donations, and your organization can be hit with civil or even criminal penalties. Soliciting donations from multiple states? You might be subject to the jurisdiction of all of them.

The specific regulations surrounding crowdfunding are debated, but the Charleston Principles written by the National Association of State Charity Officials (NASCO) can help provide some guidance. Your tax professional should also be able to provide valuable counsel.

Do: Build a Strong Support Base

Potential donors who are not already familiar with your organization or cause are much more likely to contribute if the crowdfunding campaign already has strong traction. Before promoting the campaign with the public, reach out to current and past donors who can start to build momentum. Ideally, 30 percent of your crowdfunding goal will already have been reached before your campaign even goes public. This builds credibility for your campaign from the start and helps to nurture your relationship with your donor base.

No matter how noble a cause may seem, donations made through crowdfunding are only tax deductible if they are made to a 501(c)(3) organization under the IRS tax code. Emphasize that your nonprofit has this designation and explain the tax implications to prospective donors to give you a leg up over requests from individuals, for-profit organizations and entities that aren’t designated as qualified charitable organizations.  Any questions on this aspect should be addressed by your CPA.

You can also incentivize corporations to participate in your crowdfunding campaign with a matching gift program. Giving companies the option to match any individual gifts received through a crowdfunding campaign gives them additional exposure and builds excitement around their contribution. Matching campaigns also can encourage a surge of donations from individuals who see that each dollar they donate will go much further. In lieu of a monetary donation, companies can also get involved by providing in-kind gifts for various levels of individual giving.

Just as you should with traditional donations, every single person who contributes through a crowdfunding platform should be thanked. This can be a daunting task for viral campaigns, but by keeping proper records, it is doable and invaluable for building relationships with future potential donors. Show gratitude and make it clear exactly where their money is going. Many campaigns offer tiered rewards for donating above certain thresholds, which furthers goodwill with new and existing donors.

Do: Use Crowdfunding to Solicit Corporate Sponsors

When asking for larger donations from corporations, decision makers may need more convincing than your typical pitch. Competition among nonprofits for corporate sponsors is fierce, and a history of successful crowdfunding campaigns can help you prove that your cause has a strong support base.

Take the time to build and follow through with a solid strategy for your organization’s crowdfunding campaign, and it can become an important tool for soliciting donations on a large scale.

Jennifer Cavender, CPA, is an audit engagement senior manager at Haskell & White LLP, one of Southern California’s largest independently owned accounting, auditing and tax consulting firms. She works closely with clients in the nonprofit, life science, manufacturing, real estate and service industries and specializes in corporate financial statement and benefit plan audits. Through her more than 15 years of experience, she has developed in-depth industry knowledge that enables her to contribute to her clients’ overall growth and success. She can be reached at 949-450-6344 or jcavender@hwcpa.com. For more information, visit www.hwcpa.com.