For charities, churches and nonprofits, tracking and receipting your donations, not to mention the rest of your finances, can seem like an onerous task.

Cooperstock Software, through its products found at www.software4nonprofits.com, helps small to mid-sized churches, charities and nonprofits with their financial recording and reporting, with our two programs for Windows:

This all started in the early 1990’s when I was the Treasurer for my Quaker Meeting and I bought us a commercial program for what DONATION now does, called ChurchMouse. Unfortunately, after a couple of years it started falling apart, losing data, and doing unfortunate things like allowing a donor with donations to be deleted, but leaving the donations there, owned by nobody! Being an experienced programmer, I realized I could write something much more professional and solid, and DONATION was born. 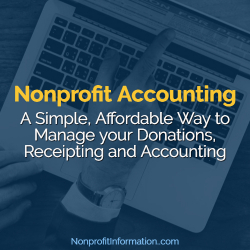 The first version of DONATION was a DOS program used only by my Quaker Meeting. When I re-wrote it for Windows in 1999, I started giving it away for free, under FreeDonationSoftware.org. I finally decided to make it commercial in 2007, and I created Software4Nonprofits.com as its new home.

ACCOUNTS was born in 2012, after years of resisting writing a bookkeeping program that would have to compete with Intuit’s QuickBooks and Quicken. More and more of our DONATION users were asking for something comparably simple and affordable, that handled fund accounting properly, so I finally gave in and created ACCOUNTS.

Our goal is to be as simple as possible to use, yet powerful, and extremely affordable.  We have lots of users who tell us “I’m not very good with computers” but who still find they can use the programs. They also appreciate our responsive support, and comprehensive help files.

We regularly have users switch to our programs from other programs that have been discontinued (for example Membership Plus users switching to DONATION), or that are too expensive and complex.

Some significant features include:

The big “win” in ACCOUNTS comes if you need fund accounting. That is when you have various funds, with running balances that you need to track, and income and expenses associated with those funds.

In traditional bookkeeping programs like QuickBooks, it is extremely difficult to keep fund balances up to date in the program. Users often have to resort to awkward and error-prone work-arounds like sub-bank accounts to indicate fund balances, occasional journal entries to update the fund balances, or even independent spreadsheets to track those balances.

Fund Income Statement reports show the income and expenses for each fund, followed by the starting fund balance for the period, the amount of changes due to the net income and any explicit inter-fund transfers, and the ending fund balance for the period. There is no way to get such an obviously helpful report like that out of a conventional program like QuickBooks that doesn’t have fund accounting concepts built into it!

One of our principles is being very transparent about our pricing (and everything else!).

Both programs can be downloaded, installed and evaluated for free for 60 days.

Specific purchase prices as of 2018:

The purchase prices include a year of support and upgrades.

In the 2nd  and subsequent years you can pay an Annual Renewal fee of ½ the purchase price for your version, for another year of support and upgrades.

You can have multiple databases for multiple organization in each program, except for the Lite version of DONATION.

Versions of the Programs

There are several different ways to share one database between multiple users, even with the Standalone version. These options are detailed online and in the programs’ help.

We are always delighted at how often users tell us that they love the program, and how much better it is than what they were doing before, whether that was manual, Excel, or a different program.

We invite you to try the free 60-day evaluations of the programs, and hope you will love them as much as the existing users do! You can get to everything on the site by starting from the home page, www.software4nonprofits.com.

Dan Cooperstock is the owner and lead developer for Cooperstock Software / Software4Nonprofits.com. He has an M.Sc. in Computer Science and over 35 years of programming and business experience. Dan is also a Quaker, and has been involved in their finances at both the local and national levels, as Treasurer and/or Clerk (chair) of their Finance Committees.