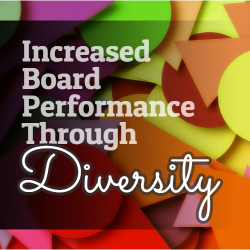 When nonprofit boards underperform against the expectations given, it’s a natural reaction for those in charge to want to terminate nonprofit board members who sandbag.  But there’s no quick fix for turning around inactive or ineffective boards, so the planning of board member selection needs to be done strategically with deliberate action of injecting cultural and professional diversity.  It’s through diversity that you can increase nonprofit board performance from the beginning.

Here in the United States, nonprofit organizations are required by law to have a board of directors for the governance of their operations.  Individual states set the requirements that dictate a minimum number of members needed, their duties and responsibilities to the public, and policies they’re mandated to draft.  But depending on the state in question, this may differ. While forming a nonprofit organization and acquiring tax-exempt status is an arduous task, establishing an effective board of directors remains even more challenging for many.  I’ve seen this first hand.  Someone with a great idea wants to satisfy a need in society, so he or she hastily forms a nonprofit organization to fill that void, oftentimes overlooking program longevity.  The founders of these startup nonprofits recruit board members from their immediate circle of influence including their friends, family, or acquaintances to satisfy those pesky legal requirements.  These are people they trust, which adds a certain amount of comfort in bringing them on board, but over time, what seemed like a great idea turns into a nightmare with challenges around fundraising, recruiting volunteers, managing finances, appointing a CEO, developing programs, and the list goes on.  The board has passion and wants to support.  After all, this is their friend.  But what went wrong?  The answer is simple, what the board of directors lacks in professional know-how, business sense, and social capital, cannot be made up through any amount of passion alone.

What I’m about to say here isn’t new, nor will it shock you, but most people surround themselves with others like them.  While this isn’t a bad thing, and even though these friends (the newly appointed board) are well-intentioned, there’s an increased likelihood these “friends turned board members” have similar values, points of views, and perspectives.  The board likely has cohesion, and while not always the case, there’s a possibility that this can result in social behaviors like groupthink.  This is when decision making becomes impaired by cognitive inhibitors due in part to lack of openness and perspective.  The appointing of the board of directors has greater implications on the tone, culture, and overall performance of the non-profit they govern.  Forming the board is one of the first steps in founding a non-profit organization, and it’s also the most important.  Forming the board needs to be done through diversity because in the end it affects performance.

Strength through diversity on your Nonprofit Board

Josefa Iloilo, the former President of the Republic of Fiji once said, “We need to reach that happy stage of our development when differences and diversity are not seen as sources of division and distrust, but of strength and inspiration.”  While this was said in the context of diversity as a sovereign nation, the same can be applied to any workplace, volunteer corps, and board of directors.  There’s a certain agility that comes from having ethnic, gender, and professional diversity.  Having diversity creates a permissive environment for shared openness, different perspectives, a wide array of professional expertise, and social capital.  Pew Research Center projects the disappearance of a single racial or ethnic majority in the United States by 2055, so with a more diverse America, a board that can think and act through the lens of the communities they serve provides advantages.  This is the bottom line; having a diverse board creates an environment where creativity and innovation flourishes.

Why diversity matters in the long run?

It’s always the easy choice for nonprofit organizations to recruit board members from their pool of members and associates (and even friends and family).  However, it’s not always the best idea.  The board has a primary function of ensuring the nonprofit organization fulfills its commitment and responsibility to the public as stated through their mission, code of ethics, and charter.  They achieve this through a check and balance system where accountability plays a vital role.  Diverse thought and experience will benefit the board when creating policies around whistleblowers, conflicts of interest, and financial auditing and management because diverse groups are likelier to have stronger accountability measures.

Another function of the board is resource acquisition.  When acquiring resources for the longevity of nonprofit organizational success, you also increase the avenues in which you look for support, thus increasing one’s networks.  Some of the resources in question may include human capital or be related to finances, but through diversity, acquiring said resources can be accomplished with social capital.  This can include the board’s access to personal and professional contacts that have the necessary resources for the nonprofit organization.  A diverse board will be able to satisfy the acquisition of resources through their reputation or credibility (this is mostly true with members who have high visibility).  High visibility board members can create a sense of “legitimacy” to the nonprofit organization’s stakeholders and the public.

More importantly for nonprofit organizations that are focused on social reform and advocacy work, there’s also the consideration of board members who have political clout.  Political capital that exists amongst the board (think connections with local, state or federal governance) can work wonders when advocating or trying to change legislation that impacts those you serve.  Diversity can also assist in setting the nonprofit organization apart from others.  There’s an added benefit of being held in higher esteem by the public versus organizations that aren’t diverse.  Boards that are diverse are adhering to social norms and acceptance, sometimes resulting in garnering more support.

Tips to increase diversity on your Nonprofit Board

Whether your nonprofit board is already formed, or you’re starting from scratch, it’s not too late.  Try some of these practices to develop a board that’s inclusive and starting off on the right foot.

Diversity isn’t the “end all,” it’s just the start

While diversity in and of itself won’t lead to success, this is a great start.  By implementing a selection process, adopting governance policy, and investing in workforce training, you take necessary measures to set up the board for success.  These steps will encourage and foster an environment of inclusion for the nonprofit organization’s other aspects.  The impact will transcend staff, even increasing diversity in the volunteer corps.  Boards with cultural, ethnic, gender, and professional diversity tend to have a more diverse leadership cadre, resulting in diversified resources.  Just be sure to err on the side of caution, don’t get overzealous and select polar opposites; this may create the perfect environment for conflict.  Doing so could act as a pitfall if not navigated in a thoughtful manner, but when done correctly will increase the likelihood of success from the onset.  Diversity in nonprofit governance will continue to be a sought after “must have,” and not just for the obvious reasons of cultural and societal norms.  Diversity also impacts long term performance of a nonprofit organization, so get ahead of the curve and plan for the future today.

How Competitive Is Your Nonprofit?
Branding Nonprofits: Six Steps to Branding like a Business
From Idea to Outcome: How to Set Goals for Your Nonprofit Organization

Jerome Tennille is Certified in Volunteer Administration, currently serving as the Manager of Volunteer Services at Tragedy Assistance Program for Survivors. With over four years in the nonprofit industry, he’s also on the Board of Directors for Peace Through Action USA, a national nonprofit social purpose organization missioned to achieve peace between people and their communities in the United Sates.