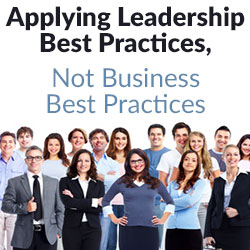 Ever played buzzword BINGO to cope with what can sometimes be the drudgery of meetings? “Synergy.” “Out of pocket.” “ Push the Envelope.”

Bingo! Nonprofit and public sector leaders are constantly advised to apply “business best practices” to all aspects of their organizations. But what does this really mean? It’s well-meaning advice usually given by someone with a wealth of business experience – but little nonprofit experience. And while there certainly is some value in established best business practices, those that are vaguely applied or applied without proper context rarely provide nonprofits the substance to translate action into desired outcomes.

Businesses have been obsessed with metrics for decades, espousing the mantra “You get what you measure.” While it’s true that if you measure something people will focus on it and work hard to improve that measure, there’s a huge missing piece here. What should an organization measure in the first place and how many metrics are sufficient? These nuanced considerations often leave leaders with just as many questions as they started with.

The concept of learning from other organizations is not a new one – from benchmarking to the ethnographic research of management practices, and even plain old first-hand observation of what works and what doesn’t. Over time, these techniques have produced commonly-held business best practices applied to a wide range of organizations and situations, but in many cases without any foundation in the problem they originally were designed to solve. In the worst cases, these once-grounded best practices devolve into management clichés.

Instead of focusing on business best practices, nonprofits should focus on proven leadership best practices. The following vignettes highlight basic tenets of leadership, which may be more flexible and, therefore, broadly-applied than situation-specific business practices. Instead, these practices are responsive to the unique demands of an organization whose mission isn’t generating shareholder value.

Getting to the Moon and Back: Establish a Vision and Plan for Achieving It

In January 1962 in Houston, President John F. Kennedy gave his “moon speech,” a poetic, soaring call to the nation, proclaiming, “We choose to go to the moon in this decade and do the other things, not because they are easy, but because they are hard….”He went on to detail the investments being made, the efforts it would take to get there, and by 1969, Apollo 11, its astronauts – the American people – had landed.

The best leaders are those able to establish a compelling vision, build an actionable plan for realizing that mission, and then tirelessly communicate both. Too often people confuse charisma and passion with vision and miss the true power a coherent vision delivers. Vision statements don’t have to live up to the language of a JFK speech or even be focus-grouped to death, but they do have to be inspirational.

But an inspirational vision in itself isn’t enough. The less-lofty but just-as-critical next step is creating and implementing an actionable plan: hard work, the fruits of which may not be realized for years. Leaders must keep their organizations focused on their vision and the progress they are making toward achieving it. This requires intense and constant communication, accomplished not in the State of the Union but transparently and in real-time every day.

There’s a great scene in the 1982 Academy Award-winning movie Gandhi in which Gandhi and his followers are about to be trampled by charging soldiers on horseback. One of Gandhi’s friends instructs everyone to lie down. What’s clear in the scene is that Gandhi knows nothing about horses’ behavior and must decide whether or not to follow one of his leaders, with little time to consider the alternatives. If he defies him he faces a possible massacre. Gandhi chooses to follow, and in this moment we see him grow as a leader.

Potential leaders are buried everywhere in a nonprofit’s organization: on the board, among the staff, in the donor community, and within the volunteer network. With so many sources of potential leaders, a nonprofit executive has to develop a trusted relationship with people who he or she may work with only intermittently. There’s the chance of entrusting someone who doesn’t really know anything about horses, so to speak. To avoid this, many executives instead end up trying to keep control over everything. While this may work for a small department or organization in the short-term, it inevitably leads to burn-out while limiting the potential of the organization and those working in it.

Fortunately, most leaders are not faced with Ghandi’s life-or-death predicament. The challenge, though, is in identifying leaders in the absence of crisis and instead staying attuned to those capable of leading in ways both big and small – especially in areas where your own skills and knowledge are lacking.

Finally, one of the hardest things all leaders must do is say “no.” Ideas, initiatives, meetings – even the most worthy of those can be distractions. But saying no to something often triggers the fear of missing out: on good candidates, good ideas, good advice. That’s when a good leader channels both JFK and Ghandi, relying on the established  vision to guide the way, the action plan to filter the “could” from the “should,” and the organization’s other leaders to help make it all happen.  Instead of relying on a la carte business-oriented practices that may or may not address your challenges, nonprofits can apply the universal leadership lessons discussed above to their distinct issues – and perhaps find that leadership best practices are what make business best practices in the first place.

Whether with his client partners – which include top names from across the federal government, the nonprofit world and the Fortune 500 – or within his own organization, Nathan Brewer’s career has been dedicated to solving organizations’ toughest challenges with innovative solutions that disrupt the lines between strategy and technology. A few years after graduating from Vanderbilt University, Nathan returned to the nation’s capital (where he spent much of his childhood) with Sapient – a leader in the technology world and today, the #1 digital agency in the U.S. Coming up as a consultant and leader with the company, Nathan worked early on to leverage Sapient’s experience with some of the world’s biggest brands to provide game-changing solutions in the public sector. Nathan has worked from the beginning of his career to shift paradigms in the consulting environment. As one of the first employees in Sapient’s Government Services business unit, he was challenged to help profitably operate a government consultancy within the context of a global commercial firm. As a leader in the business, he helped grow Sapient’s government practice to nearly 500 employees, and its revenue by over $50 million. During this time, he earned an MS in Engineering and Technology Management from Oklahoma State University and an MBA from Emory University, and became a Vice President in 2011. Later, looking for innovative ways to expand the firm’s portfolio, Nathan began to explore the ways creative social change takes place in the world, and how consulting companies can play a constructive role in that change; he went on to start Sapient’s dedicated nonprofit practice, and today, leads Sapient’s Nonprofit Practice -- whose clients include well-known pillars of Washington’s nonprofit and association world as well as global nongovernmental organizations. He’s an active writer and speaker within the industry.