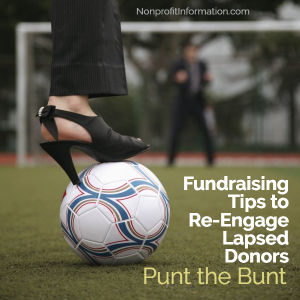 If you’ve worked in fundraising and development for more than five minutes you’ve probably come across the terms LYBUNT and SYBUNT. To those outside the field these fundraising acronyms may sound like Klingon, but for development officers they’re part of everyday conversation. Pretty self-explanatory – a LYBUNT (Last Year But Unfortunately Not This) donated last calendar/fiscal year but not this year, a SYBUNT (Some Years But Unfortunately Not This) made a gift in some previous year(s) but – wait for it! – not this year. Many fundraisers target these audiences on automatic pilot, but successfully re-engaging lapsed donors should involve a little more thought.

Here’s some advice to get you thinking outside the BUNT box.

A supporter who donated last year but hasn’t yet given a gift this year (LYBUNT) doesn’t automatically fall into lapsed donor territory or even the at-risk-of-lapsing zone. Until a full year has passed, and even for a short while longer, consider these folks current donors.

Think about it. Last August you made your first gift to an organization. They added you to their mailing list, maybe even invited you to an event or two. (This is assuming they’ve been properly stewarding you since you made your donation. More on that in another article!) Fast forward 13 or 14 months. You still feel passionate about the organization and its mission but for whatever reason haven’t gotten around to making another gift, or you simply haven’t been in a position to do so. You’d be surprised – and probably disappointed – to discover the organization already considers you a has-been.

Some nonprofits set specific parameters, say 13 months without a gift, after which they consider a donor lapsed. That works, but it’s also very limiting. It’s still early enough in the game to think of them as current donors whom you want to steward toward their second gift. No one wants to alienate supporters with language like “What happened?! We want you back!” when they still consider themselves engaged.

For a lapsed donor campaign I’ve been developing, I’m looking at donor giving history for the past five years. In my experience I’ve found that when it comes to lapsed donors, reaching beyond that point offers little to no reward, but every nonprofit’s donor base is different. I’ve identified a target audience that looks like this:

To paraphrase Shrek, fundraising is like an onion – it has layers. “Some” years of giving (SYBUNT) is a pretty broad definition, and the last gift of a SYBUNT donor can range from two years ago to 10 or more. It takes a little work, but roll up your sleeves, pour yourself a strong cup of coffee, and settle in for some serious donor data review.

Once you’ve defined what “lapsed” means to your organization, you can begin reconnecting with these donors through targeted communications that clearly show the impact of their gift, followed by an appeal that expresses how much you value their support and your hope they will renew it, again emphasizing impact.

Implementing a unique campaign like this for every donor is impossible – donor lapse is an ever-moving target. Now that you’ve defined “lapsed,” you’ll see you have lapsed donors every month, maybe even every day!

For simplicity’s sake, you can use the calendar year to schedule an all-encompassing lapsed donor campaign, keeping in mind that you’ll want to exclude donors whose latest gift is less than one year old (remember that thing about alienating donors?).

You can reconnect with these folks through targeted communications during the first two quarters of the calendar year. For example, if their last gift was in December 2018 and it’s now March 2020, use the next few months to send a few donor touches that emphasize the importance and impact of their gifts and keep your organization on their radar.

Later in the year, perhaps even in Q4 as part of your year-end appeal, you can follow up with a customized fundraising campaign. As you prepare your campaign, reexamine your donor list in case your initial touches were so successful that you re-engaged donors earlier in the year. You don’t want to ask those people to “come back” yet again!

As always, once your campaign is complete, study the results to gauge its success and identify strengths and weaknesses. Fundraising campaign results can inform future donor communications and appeals, so a little number crunching now can go a long way.

As all good fundraisers know, at the end of the day it’s about relationships and letting donors know how much you value their support. Retaining current donors and recovering lapsed ones is more cost-effective than acquiring new donors. And re-engaged donors can become your organization’s most ardent supporters, so taking the time to treat them well is in everyone’s best interest. It’s said an ounce of prevention is worth a pound of cure – in terms of fundraising, that means serving your current donors well to improve your donor retention rate and minimize donor attrition. With good planning and thoughtful communication, you can turn “We miss you!” into “Welcome back!”