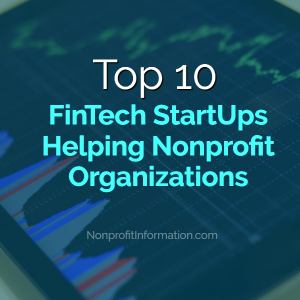 From swifter payments to more secure transactions, Fintech companies have had a major influence on financial services at large, redefining expectations and standards.

Fintech is beginning to establish itself in this traditional sector, and entrepreneurial firms are developing new products. However, these are not the only areas affected by Fintech. Charitable giving has also changed radically and, thanks to inventions that streamlined transactions, it is now more convenient than ever to engage and support social causes across the globe.

It is obvious that the progress made by Fintech startups also empowers nonprofit organizations, which now have access to cutting-edge funding tools for fundraising, database management, volunteer engagement, and community outreach. The following are top 10 Fintechs startups that have made a tremendous stride in the charitable giving process and have given back to the local community:

Chuffed is an online crowdfunding platform created especially for non-profit and charitable organizations that have reached remarkable figures over the years since its inception: 15 million euros raised, over 7,900 social campaigns and over 220,000 funders. Anybody can create and manage a social cause campaign on this website, regardless of whether it is related to social welfare, the LGBTQ+ community, education, and animal rights. As the funds are received, they are wired to the owner’s PayPal or bank account. The party launching the campaign receives 100% of all proceeds, as well as support with online campaign promotion.

The RoundUp App is the number one funding tool that automatically rounds off users’ debit or credit card transactions and gives the “change” to your nonprofit, providing a new flow of recurring donations. Nearly 10,000 people have created accounts on the application and are helping more than 1,000 nonprofit organizations, according to RoundUp. As of 2019, donors contribute an average of $15.34 per month.

Pennies is a state-of-the-art charity that makes donations easier for ordinary people. By partnering with retail outlets, they give buyers the option of rounding up their receipts when paying by card and those few extra cents are used for a social cause. Pennies work in-apps and in-stone, as well as online, and to date have helped over 200 non-profits.

With over $30 million received in funding, CrowdRise is another funding platform for nonprofit organizations. It helps users launch their fundraising sites and the funds go straight to a charity, irrespective of where the campaign initiator has achieved his or her goals. So far, CrowdRise has partnered with famous organizations like UNICEF, Red Cross, and the Boston Marathon.

Cheerful formally called Bstow – develops online fundraising tools for churches and nonprofits. Providing several means of giving (recurring, one-time donations or rounding change), Cheerful is compatible with the iOS devices, Web and soon Android devices. While donating a few pennies doesn’t seem to be much, Cheerful has a lot of users and, with a retention rate of 90%, has been able to help many non-profit organizations surmount funding challenges. By using Cheerful, members can choose from as many as 1.5 million nonprofits to donate to.

Online services and card payments have greatly enhanced the donation process. However, what if giving were as straightforward as making a hashtag? This has been the hallmark behind GoodWorld, one of the most pioneering charitable fintechs. People who join GoodWorld just have to fill out a form and then each time that they wish to make a donation to a particular cause on social media, all they need to type is #donate, then the exact amount they want to donate.

Betterment is a company that automates online investment for users. The service features a charitable donation feature, which allows users to gift shares via Betterment, thereby ensuring that the nonprofits receive the user’s 100% donation. Users can donate shares to charities such as UNICEF USA, Feeding America, and Save The Children. More than $700,000 were donated to charitable organizations through the company’s services in 2017, Betterment reported.

ImpactGuru is India’s most popular crowdfunding platform, having helped over 10,000 people and charities with over 13,000 fundraisers. While also accepting traditional donations, ImpactGuru became famous for its incentives based on rewards and private investment ideas. ImpactGuru remains the only platform in India that offers tax benefits to Indian, American, and British donors.

The online payment company is active in 24 currencies and 190 markets worldwide. The PayPal application offers an option to donate to non-profit organizations with the flick of a wrist. Also, the website encourages donations via the PayPal Donations Fund, which covers all deductions and commissions. PayPal disclosed in 2017 that the firm generated over $100 million for charities. The firm says the company received donations from more than a million customers and the funds donated were allocated to over 46,000 charities.

Cleo is a UK-based Artificial intelligence fin-tech start-up offering users financial planning tips to save money and get information on where and what they spend. Cleo has also recently added a donation feature: users can just utter the word “donate” in Cleo’s chat and a percentage of their savings will be donated to charity. They can activate and deactivate the option to donate from time to time, and modify the amount they want to donate to charity.

The U.S. Is Battling Social Crises on Many Fronts: 3 Ways to Enhance Collaboration to Help Nonprofit...
Interview with Mike Sand, a Nonprofit Consultant
How to Avoid Managing to the Numbers Ruining a Holiday

Raviraj Hegde is the director of growth at Donorbox. He is a digital strategist with over 5 years of experience. He is passionate about helping nonprofits with online fundraising. He enjoys playing badminton and travels the world when he’s not at work.