Fraud, stealing, theft, embezzlement…it’s called many things but the end result is that an employee took money that didn’t belong to them, without permission, and converted it to their own personal use. These kinds of insider thefts have major financial impact! According to the Association of Certified Fraud Examiners (ACFE), organizations around the world lose an estimated 5% of their annual revenues due to fraud.

Fraud at a “for profit” company can be detrimental enough but at a nonprofit, where margins are thin and donations are hard to come by, especially in a depressed economy, every dollar is needed to serve the organization’s mission statement. Consequently, a large embezzlement can easily account for significantly more than 5% of the organization’s annual revenues and this type of financial loss can be catastrophic to the organization, their reputation and continued operation. Further, fraud at a nonprofit significantly impacts the organizations ability to raise donor money due to the perceived loss of confidence in how the nonprofit manages their business and dollars raised.

We’re often asked if fraud can be prevented. Absolutely. While nothing is completely foolproof, preventing fraud in all businesses is largely about the strength of the internal controls and nonprofits are certainly no different than any other business in that regard. Internal controls, and anti-fraud processes, were the focus of Nonprofit Check Up – Is Your Bookkeeper Embezzling?(June 12, 2013). Rather than revisit the internal controls necessary for nonprofits to prevent fraud, this article takes a completely different approach, focusing instead on some of the reasons employees steal, the behavioral symptoms (red flags) which may appear and signs nonprofits should look out for. 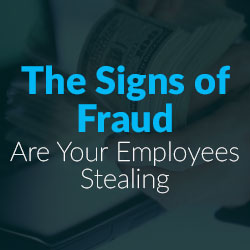 The Signs of Fraud

While an employee’s activities “after-hours” are really not an employer’s concern, oftentimes after-hours activities manifest themselves in the form of individual lifestyle changes which are fairly transparent during working hours. While not all lifestyle changes are indicative that an employee is committing fraud, every fraud case has fairly obvious “red flags” which represent drastic lifestyle changes and some of the symptoms and lifestyle changes are discussed in this article. Interestingly, when employees are asked by co-workers how they can afford their new found lifestyle, embezzlers often respond with something to the effect of “I inherited some money.” While that’s certainly possible, it’s also a line intended to distract anyone inquiring from digging any further because it sounds plausible and inheritances are not a matter of public record which can be easily verified.

“Former CFO of Nonprofit Admits Embezzling More Than $348,000 to pay for his living, travel, entertainment, and home improvement expenses.” (FBI.gov)

Quite a few embezzlers take money from their employers for reasons associated with maintaining a middle or upper class lifestyle which they can’t otherwise afford. This is the “living above your means scenario” or what we refer to as the “keeping up with the Joneses” motivation. This often manifests itself in money spent on: a new house, house renovations, new cars, private school tuition for the children, college tuition, recreational vehicles (boats, 4×4’s, motor homes), swimming pools, lavish vacations and expensive new clothes as suggested in the headline above.

Disposable income (cash), jewelry (“bling” for self or others), major sporting events and medical care for children (healthcare, surgeries, braces etc), are other reasons why employee’s commit embezzlement. While we all have routine medical bills for doctor’s visits, medical care etc., those certainly don’t justify embezzling from one’s employer to pay minor bills no matter how an embezzler spins it after the fact. However, the care of a dying child certainly presents an extraordinaire circumstance.

While you don’t hear about this type of situation too often, fraud professionals analogize the extreme medical situation embezzlement motive to the “John Q” story, a 2002 movie in which Denzel Washington played John Q, the father of a sick son needing a heart transplant. The movie centered on the sick child and the insurance company’s refusal to pay for the operation. So, to save his son, John Q took matters into his own hands, stormed the hospital’s ER and took hostages in an attempt to get doctor’s to operate on his son. This story reflects the “I did what I had to do for my child” mentality which is prevalent in all parents and some embezzlers.

While embezzlement is usually chalked up to money spent on frivolous things, embezzlement which is solely committed to pay for the medical care, or treatment, of a terminally ill or dying child is certainly much harder to swallow. It still doesn’t justify the act, as there are certainly other social services resources available which one could take advantage of in this situation, but at the very minimum compassion may dictate an understanding of this situation and the motive for an employee’s doing so.

Oftentimes, interviews with embezzlers reveal that the sole motivation for embezzling

money from an organization was the desire to “get back” at the business!” This is the maligned employee, with an “I’ll show you” type attitude. Professional resentment usually festers over time, manifesting itself in statements like “you didn’t promote me or promoted someone else, you don’t value or appreciate me, you don’t take me seriously or treat me fairly, you made me work extra or long hours or don’t pay me what I’m worth” and “I hate my boss!” In an attempt to “get back at the business the employee steals to “punish the organization” and “right being wronged,” which is reflected in a “hit them where it financially hurts” philosophy.

Sadly, we’re finding that addictions are increasingly the motive for embezzlement and addictions manifest themselves in a number of different ways including: credit cards, habitual shopping (online, in person, or television based shopping networks), Internet auctions (EBay), drugs, gambling (casino or online), sexual habits (strip clubs, escorts, prostitutes etc.). In support of this point, here are some examples of addiction related headlines: 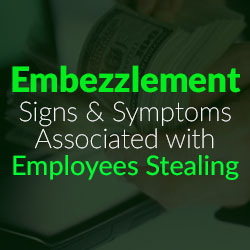 “Former nonprofit leader sentenced for embezzlement of $1 million from the organization to fuel an ‘out of control’ gambling habit.” (mainebiz.biz)

“Woman gets 3 years in prison for embezzling $530,000 from nonprofit… to support her $800-a-day drug addiction” (Jacksonville.com)

Further complicating the addiction motivation is the fact that almost everything you can do in person, you can now do on the Internet. This has opened the door to many new types of online addictions and addictions are often the motive for committing embezzlement as we saw in the headlines above.

The focus of this article has been on embezzlement and some of the signs and symptoms associated with employees who steal money from their organizations. All is not lost however as there are steps nonprofits can take to prevent embezzlement. In addition to having strong internal controls and an active audit program, being observant and taking note of the signals associated with individual lifestyle changes is key. In this article, we’ve talked about lifestyle changes and red flags. Again, while not all lifestyle changes are indicative of fraud, when looking back at most embezzlements there were significant lifestyle changes present in the individual and these appeared in the form of red flags. Very simply put, a red flag is a warning sign that something unusual is occurring and warrants immediate attention to determine if there is potentially fraudulent activity going on or it’s just anomalous human behavior that is otherwise easily explainable with additional information.

One of the biggest keys to preventing large scale, damaging embezzlement at nonprofits is to observe human behavior and look for significant lifestyle changes (red flags) in individual employees working in key financial roles or with access to the organization’s funds. When red flags appear then do a little due diligence. Casually talk to people and engage them in conversation listening for the subtle clues which suggest something might be going on. Don’t be accusatory as this is not an investigative interview or confrontational conversation designed to solicit a confession.

While the employee likely won’t come out and freely admit they’re stealing to fund their new lifestyle, the red flags associated with the lifestyle changes should be the warning sign which tells you that it’s time to dig a little deeper into the organization’s financial records and look for unusual financial transactions and patterns which you were previously unaware of. Early due diligence and proactive intervention may be the key to preventing a large scale, organizationally damaging, embezzlement which loots valuable donations, crushes your brand and closes your nonprofit’s doors!

Daniel W. Draz, M.S., CFE is the Principal of Fraud Solutions a global fraud consulting firm located outside Chicago. He is a recognized leader in the fraud profession, providing innovative enterprise anti-fraud risk management strategies, insightful observations, fraud training, and thought leadership to clients. He works with companies to improve their enterprise fraud risk management efforts and reduce major fraud losses. Follow us on Twitter @_fraudsolutions, or via e-mail: dan@fraudsolutions.com.