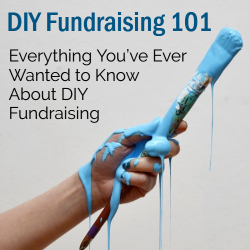 Do-it-yourself (DIY) fundraising is one of the most exciting growth opportunities for nonprofits and is definitely one of the fastest growing types of peer-to-peer fundraising out there.

That’s why we thought it was time we gave DIY fundraising a good deep dive so that we can help nonprofits understand how it works and why it’s such a great tool to implement for those looking to grow and expand their peer-to-peer fundraising.

What really is DIY fundraising?

DIY fundraising is a new fundraising channel that empowers your community of supporters to raise money on your nonprofit’s behalf by starting a fundraiser of their own at any time —without cannibalizing any of your other campaign efforts.

The DIY part refers to the notion that your supporters have the flexibility to create an event or fundraiser that’s personal to them, not attached to a larger nonprofit campaign or event. Your supporters can get creative, have fun, and support you during a time that works best for them, and in any way that they want.

The peer-to-peer fundraising you might be most familiar with is usually organized around an event.  Supporters are encouraged to start a fundraiser for an organized event (marathon, seasonal or themed campaign, bowl-a-thon, giving day, etc.) with all of the money raised by each individual rolling up to a grand total for your event.

Both utilize passionate supporters to reach out to their network of friends and family in order to increase donations and awareness, but the main difference is in who organizes the event — the event is organized by your nonprofit vs. organized by the supporter themselves. (This also means that there isn’t the associated maintenance for your nonprofit that typically comes with running a structured campaign.)

Does DIY work in the real world?

I answer that question with a resounding yes (and if we embraced exclamation points we’d even add one here). Time and time again, we’ve talked to partners who’ve had incredible success when they’ve incorporated DIY fundraising into their overall strategy.

The Leukemia & Lymphoma Society is one example of how embracing DIY fundraising can make such an impact. With their Lifestyle program, LLS offers up encouragement and ideas on how you can create your own DIY fundraiser. The director of the program, Colby Marple, nailed it on the head when he told us recently, “People want to make a difference. Instead of keeping [ideas] regional, what we wanted to do is create a national platform that allows all these great stories, all these great ideas to come together in a single place. And that’s what CrowdRise enabled us to do with our Lifestyle program. It’s really about making it possible for anyone to start a movement to help us cure cancer. It’s about saying yes and just empowering people to get after it and make a difference.”

“It’s really about making it possible for anyone to start a movement to help us cure cancer.”

And that’s what it’s all about. Empowerment, encouragement, and in a way, letting go of control. As an organization, you have to allow your supporters to show their passion for your nonprofit in their own way. Your supporters are hungry for an opportunity to show they care, but they may not have an outlet that allows them to do so in the way they want. This is why DIY fundraising really can be important for your cause.

This all sounds great, but is it a ton of work?

The great thing about DIY fundraising is that it works well without a lot of hands-on activity from you, the nonprofit. Now, that’s not to say that it’s a ‘build-it-and-they-will-come’ type of idea. But rather, if you take the time to put the structure in place, provide encouragement along the way, and make your fundraisers feel like heroes during and after their campaign, you’ve got the makings of an evergreen fundraising push that will see repeat performance throughout the years to come.

As LLS thinks about it, “the theme across the board is any activity, any passion, any hobby, anything that brings people together can be a tremendous movement and a successful movement to help us cure cancer.” And, isn’t that what every nonprofit is ultimately trying to get to? Empowering movements that create real impact in order to create the change needed to get you to your goal?

Curing a disease, building shelters, rescuing animals… no matter what cause space you are in, passion runs deep in your supporters. And when you give them a platform to take that passion and run with it, amazing things start to happen.

How to get started with DYI Fundraising

Show your supporters the possibility of DIY. Include inspirational stories or examples of fundraisers who gave up their birthday, ran their own race, or shaved their beard for your cause. Put together some best practices for your DIY fundraisers and set up a schedule of encouraging posts, emails, and reach-out opportunities for your organization in order to keep supporters motivated and excited. Also be sure to thank them at the end of their fundraiser so they feel appreciated and hungry to do even more. It’s also important to make sure you’re set up on a fundraising platform that allows for simple DIY fundraiser creation, as well as gives supporters access to your best practices and examples so that they feel encouraged and motivated to stick around and set up their campaign page.

With DIY fundraising growing at a rapid pace, with the right fundraising platform, and some up front strategizing, embracing and encouraging DIY can make a huge impact on your cause.

Are You Using DAF's to Attract a Younger Donor Base? You Should Be.
Virtual Fundraising: Tips for Moving In-Person Auctions Online
Keeping Donors & the Public Relevant

Gary Wohlfeill is the Director of Brand & Marketing at CrowdRise. He works with partners to develop highly engaging fundraising campaigns and leads the marketing team in developing the CrowdRise brand.