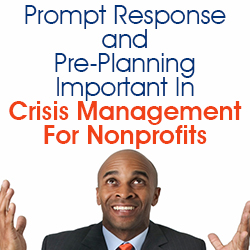 Whether it’s turmoil in the executive suite, a failed fundraising campaign or financial fraud such as embezzlement, every organization hits bumps along the way.

And many of those organizations make it worse with their response (or, more often than not, lack thereof) to a crisis.

Organizations get in trouble when they try to hide bad news. Granted, it’s human nature to protect oneself, but trying to tamp down, declining to comment about or even concealing bad news is a big mistake.

It’s better to get things over and done with – kind of like ripping off a bandage with one fell swoop or swallowing nasty medicine in one gulp – than hoping the story simply goes away.

Say Nixon had come forward after the Watergate break in and said the burglars were affiliated with his re-election campaign, that he was embarrassed to be associated with such a terrible thing and he was taking appropriate action.

There would have been condemnations galore for a week or two and lots of navel-gazing commentary from the media. And then it would have largely been forgotten, with Nixon cruising to an easy election win in 1972.

Instead, Woodward and Bernstein were there to tug on loose threads that caused a presidency to unravel.

Now consider what happened in 2012 to breast cancer foundation Susan G. Komen for the Cure when it announced plans to stop giving money to Planned Parenthood for breast examinations and related services.

A deluge of criticism occurred on Komen’s own Facebook page, with many one-time proponents pledging to drop their support. Meantime, the backlash was just as bad on Twitter, and the mainstream media got in on things, too.

So, what did the organization do?

It did nothing for 24 hours, which is an eternity in today’s world of continuous news cycles. And the organization’s response was tepid and did little to dispel accusations that the funding decision was prompted by new Vice President Karen Handel, a known abortion opponent.

Several days later, Komen reversed its decision with a weak statement that failed to smooth ruffled feathers. A few days after that, Handel resigned.

Still, the damage was done, as local events were cancelled, other executives resigned and fundraising suffered. Contributions, which include donations and corporate sponsorships, fell 22 percent from about $164 million in the fiscal year ending March 2012 to $128 million a year later.

By leaving rumors floating around and questions unanswered, you’re asking for trouble. That’s to a reporter what a red flag is to a bull.

Left in the hands of a tenacious media, the bad news will come out in drips and drabs, turning what could have been a short-term blast of negative publicity into a long-running saga.

Meantime, someone else is controlling your message, which is something you definitely don’t want to happen.

Another reason for getting bad news over and done with as soon as possible is the chance to appear forward thinking. Take responsibility for the problem, apologize and announce steps to correct it. People respect honesty and action.

Consider Johnson & Johnson’s textbook response in 1982 when seven people died after taking Tylenol laced with potassium cyanide. The company pulled the product from store shelves, shut down production and assisted police in the hunt for the killer. Afterward, the company reintroduced the product with new tamper-proof packaging and offered discount coupons.

Nonprofits have an extra burden in times of crisis: Fair or not, nonprofits are held to a higher standard than for-profit companies and are expected to operate efficiently and honestly.

Still, the PR game plan for a nonprofit is not really different from what a for-profit operation should do.

To minimize damage, every organization needs to adopt the Boy Scouts motto of “Be Prepared.”

The first step is to actually plan in advance. Consider possible crises and develop responses. Create an action plan that includes a comprehensive media contact list. Assign authority for various tasks, then practice the plan on a semi-annual basis.

Once a crisis hits, it’s crucial to act quickly so you can help control the message. In addition, it makes the company appear to be proactive in solving problems.

Designate a single spokesperson – preferably someone fairly prominent in the organization – so the messages remain consistent. This person needs to be accessible and a well-polished speaker. Just in case, have a backup spokesperson.

Before speaking, be prepared. Anticipate key questions, but only divulge information as required. Never speculate and, most importantly, NEVER lie.

Make sure to describe steps taken to alleviate the problem – and to make sure it never happens again. Don’t play the blame game. Apologize if needed.

Given its immediacy, any response requires social media interaction. Monitor social media responses to see what’s being said. Make sure to respond to and correct any erroneous information being disseminated by others, but don’t be condescending or critical.

Perhaps the most important thing in dealing with a crisis – and the thing that many organizations repeatedly avoid – is taking responsibility. Be quick to acknowledge the problem, express concern and detail how the company is going to deal with it.

Once the plan is implemented, it’s not time to relax. Issue updates as warranted; even if there’s no news to report, avoid “radio silence.”

And when the crisis is over, thank the public and any people or organizations that helped solve the problem. Reinforce the sense of community.

Some other tips for crisis management:

So, let’s see how this might this play out for a nonprofit that finds one of its top executives accused of embezzlement,

For argument’s sake, let’s say that “Company X” just discovered its chief financial officer had embezzled $3 million over a five-year period. The media is aware of the embezzlement and police have told the organization that the CFO is going to be arrested. Rumors have begun to circulate, and would-be donors are having second thoughts.

Clearly, this is a tough situation – and Company X needs to take immediate action.

Announce the unpaid suspension of the CFO; terminate that executive as soon as charges are filed.

Hold a press conference to describe what is happening, the impact and also discuss how the organization is going to make sure the incident never happens again – in this case, some sort of steps that add checks, balances and oversight to the accounting process.

In the days and weeks that follow, issue occasional updates and offer media access to key organization officials (but make sure they’re well coached about what to say).

Throughout the process, remind both the press and public about the good things the organization has accomplished and upcoming goals and events. Use “trust” as a theme in all communications, and repeatedly touch upon unrelated positive things that are happening.

Ultimately, the organization is going to take a hit, but with proper planning and execution that hit will be minimal, the press will move on to other topics and the bad feelings will fade from the public mindset.

At that point, another PR program reinforcing the organization’s good works – and announcing new ones – is in order, but that’s a topic for another article.

Five Reasons You Need Accounting/Financial Experience on Your Board
Pain Points for Nonprofits and How to Handle Them
Nonprofit Payment Processing: The Only FAQ You’ll Need

Andy Gotlieb is a public relations writer for Garfield Group, a Newtown,Pa.-based marketing firm that specializes in branding, public relations and digital services for technology and innovation-minded companies. Gotlieb spent 17 years as a journalist, with stops at the Arkansas Democrat-Gazette, Tampa Tribune and Philadelphia Business Journal, before joining the public relations world nine years ago.