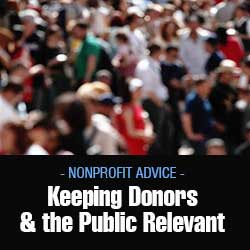 Many in the nonprofit sector believe that fundraising is the single most challenging and most important component in running a nonprofit.   While there’s no one who would argue that it is challenging and important, some say there are other basic fundamentals that are equally important.  Relevance is definitely one.

For those nonprofits that deal with funding for medical research or helping people in need, or saving lives, the relevance is immediately apparent.

But for a museum such as a Holocaust Museum, the connection for the donor could be harder to realize and find. For example, art museums, historical and archival collections and memorials all look to the past.

What those of us who run these organizations know full well is in order for a donor to commit and contribute, they have to feel that it relates to them in some strong way and therefore their involvement is critical and crucial.

In addition, the donor needs to feel the sense of urgency and the incredible importance and significance of the project and that it has a direct impact on their lives and their families. Nothing is more inviting to a donor than letting them know that their commitment will make a tremendous and meaningful difference and have an impact on their future, their children’s future and their grandchildren’s future.

For the past 35 years, The Holocaust Documentation and Education Center (HDEC) has chronicled the records of the Holocaust through eyewitness accounts by survivors, liberators and rescuers and others who survived the horrors of this tragic time.  Equally important however, the HDEC strives to teach people from all walks of life the universal lessons of the Holocaust.  That’s where we become and remain relevant – now and in the years to come.

Why else come to any museum?  What are the goals of the museum and what are the expectations of the visitors?  What happened during the Holocaust is a terrible time in world history, but it is our mission to learn from that time period – to make it current and universal and yes, relevant to today.

To do this, museums regularly reach out to schools.  Many schools have field trips for younger students and mandated visits for older students.  Today’s students are asked to learn about history not because they should memorize the presidents in order or know what general served at Bunker Hill, but to truly understand what happened. For example, visiting the National Museum of African American History allows today’s youth to begin to grasp and learn about the magnitude of slavery.

Similarly, a visit to the HDEC gives visitors a glimpse into the past, as well.

The Holocaust Documentation and Education Center makes education part of its name because without educating ourselves, we stand no chance of making a change.  We run Student Awareness Days that gives high-school-aged children the opportunity to hear from Holocaust survivors, and to learn about their tragic and painful past.

This is powerful, moving and impactful. Student Awareness Days serve as “imminent fundraisers” that don’t immediately raise funds. These events are the soft sell. They create buzz in the media and in the community and, in turn, attract donors via the programming and educational aspects that donors like to relate to and therefore participate in and eventually support as they see firsthand  the HDEC programs and plans  for present and future generations. This not only resonates with existing donors, but works in attracting new ones as well.

We feature writers, art work and anchor artifacts such as an authentic Holocaust railcar that travelled from the Warsaw Ghetto to the Treblinka Death Camp, a U.S. Sherman Tank as well as thousands of documents, artifacts and photographs. What happened during the Holocaust happened to an entire population, but when visitors read a letter, view a drawing, watch a short film or see a photograph, the universal message becomes personal.

And then it becomes relevant.

That helps motivate donors to give money, and volunteers to give time and teachers to bring students, and parent to bring children.  And sometimes children to bring their parents.