About Jerrold B. Binney

Jerrold Binney joined Children’s Aid and Family Services in February of 2015 after serving as a member of its Board of Trustees for 12 years. He served also as Chair of the agency’s Government Relations Committee. Mr. Binney manages all aspects of the agency’s operations. He has extensive experience in the human services field, and most recently served as Acting Administrator for the County of Bergen. Formerly, he was a partner in the Teaneck office of DeCotiis, Fitzpatrick & Cole, LLP, where he specialized in public/private partnerships and governmental affairs. His public service positions have included serving as a Legislative Aide in the New Jersey Assembly, Assistant Director of the Department of Human Services and as Chief of Staff for the County of Bergen. A passionate advocate for vulnerable children and families, Mr. Binney has been active in numerous nonprofits, including serving as a Trustee for Northern New Jersey Gilda’s Club and as pro bono counsel to the NJ211 Partnership. Mr. Binney received his B.A. with honors in Political Science from Pennsylvania State University and his J.D. from Duquesne University School of Law. He studied also at the Program for Senior Executives in State and Local Government at the John F. Kennedy School of Government at Harvard University. 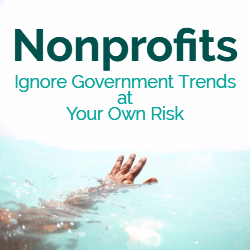 You can bet your bottom dollar that there are government initiatives somewhere – in Washington, your state capital, or local levels – that are underway, and they may have a big impact on nonprofits generally, and maybe your nonprofit specifically. Government machinery is not stagnant, as it constantly reacts to changing political, social and economic environments, thereby creating change to the various constituencies; nonprofits are certainly not immune. Many nonprofits, some more than others, are heavily reliant upon government programs and contracts to support their operations and budgets. Some nonprofits receive as much as 80% of their funding from governments, including federal, state and even locally.

Even if your organization does not receive substantial government funding, keeping a watchful eye on government activity and proposals is essential. For instance, federal and state initiatives to raise the minimum wage can have a substantial impact on your workforce, as well as recruitment and retention policies. Another example is local government efforts to change laws or ordinances relating to property tax exemptions or payments in lieu of taxes (“PILOTS”) for nonprofit facilities.

At all levels of government, it is important to monitor the 3 B’s: Bills, Budget and Bureaucracy (regulations). Let’s look at each of the “B’s” and what you can do:

Bills: Legislative bodies at all levels introduce hundreds of bills or legislation that would affect your organization. Most nonprofits belong to federal or statewide advocacy groups that monitor proposed bills. I highly recommend joining these organizations. There are also websites such as, www.govnetweb.com that provide status reports on individual bills.

Budget: When the President or the Governor presents the budget, it is helpful to obtain a copy of the budget address and read it, as this address lists the spending priorities for the year. You may also want to go to the appropriate department’s website for notices about the budget. The most notable current example involves the federal and state approaches to Medicaid funding, much of which is dependent upon the future of The Affordable Care Act (Obamacare).

Bureaucracy: Many people call the “bureaucracy” the “hidden government.” Well, bureaucrats really aren’t hidden but they are powerful. In addition to monitoring contracts and licensing issues related to nonprofits, bureaucrats also draft new regulations pursuant to statutory authority. Regulations may not receive as much media attention as legislation, but they are important. As an example, in 2016, the Obama administration proposed a significant change in the overtime exemption rules under the Federal Labor Standards Act (“FLSA”). Ultimately, the rules were enjoined by a federal district court but nonprofits everywhere were scrambling to adjust their budgets and workforce standards in an effort to comply.

Nonprofits are not supposed to be political or partisan and that is a good thing.* Our missions and our clients are what matter. However, failure to monitor what occurs at every government level can result in reversal for any business; for nonprofits it is even more imperative as governments are often our partner in providing safety net services. Get to know your congressman, your legislator or your mayors; sometimes it helps to get to know key staffers as well. When something is happening, they will (or should) be there to listen to you or your organization’s concerns. Engage your Board members as well. Nonprofits are an essential part of our democracy and our ability to serve or help the most vulnerable of our citizens. Don’t get left out!

*Ironically, there are several proposals in Washington that will allow nonprofit organizations to become “political” and “partisan.” Personally, I believe that this is a grave misdirection, but that is a whole other discussion.