David Hollander, CPA, is a principal in the Audit Department at MBAF. David has broad experience in various industries including aviation, distribution, manufacturing and nonprofit organizations. David has been in practice since 1994 specializing in audits of small and medium size businesses and non-profit organizations both domestically and abroad. David’s dedication to his clients has resulted in a stellar reputation for service and he is known for his personalized service and timely prevention of potential problems. He has extensive background with foundations and organizations that receive federal and state funding. David also deals with many of the firm’s employee benefit plan audits. David works closely with our Technology Consulting Department and continues to provide feedback in regard to our computer development and the internal control environment. 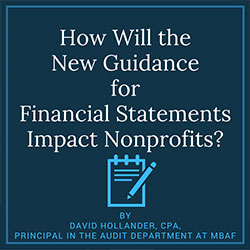 After almost four years of research, analysis, and debate, the Financial Accounting Standards Board (FASB) released its highly anticipated update on financial reporting for nonprofits. The update, which was officially released on August 18, 2016, has been designed to “help not-for-profits tell their story through their financial statements.”

The existing guidance has been in effect since 1993, and while it has held up well over that time, “stakeholders expressed concerns about the complexity, insufficient transparency, and limited usefulness of certain aspects of the model,” said FASB Chairman Russell Golden. “The new guidance simplifies and improves the face of the financial statements and enhances the disclosures in the notes,” he added.

Basically, the Accounting Standards Update, designated ASU No. 2016-14, decreases the number of net asset classes from three to two. The new classes will be:

The update will change the way all not-for-profits (NFPs) classify net assets and prepare their financial statements.

All nonprofits, from the local soup kitchen, to major colleges and universities, have been using the same financial statements for the last 20 years. While good, at the behest of stakeholders, the FASB saw the need to make improvements to the existing model.

There are actually 29 different types of NFPs identified by the tax codes, but these are the three most common entities. Regardless of the classification, all nonprofits will be required to follow the new financial statement requirements.

The FASB has produced a video, explaining why the standard needed to receive a makeover.

Details of the New Guidance for Nonprofits’ Financial Statements

The update was designed to help not-for-profits provide more relevant information about their resources, and any changes in those resources to donors, grantors, creditors, and other users, in effect to “better tell their stories.”

The FASB believes that the update, not only simplifies and improves communications with stakeholders, it should also reduce certain costs, related to the complexities in preparing their financial statements.

When Do the Changes Take Effect?

This is just “Phase 1,” of the FASBs project to revamp financial statements for nonprofits. The organization says there will be a “Phase 2.” Phase 2 is slated to address ways to improve operating measures and provide enhanced alignment between the statement of activities and statement of cash flows. The FASB has not indicated any timeframe for the completion of the second phase.

Certainly, these new regulations will have a significant impact on all nonprofit organizations and those stakeholders who rely on their financial statements. While the changes were designed to simplify financial reporting for NFPs – and in the long run, they will – getting used to the new requirements could still be complex. The earlier you begin working with your tax professional, the easier it will be to implement the necessary changes to ensure your financial statements will be in compliance with the new standards when they take effect.