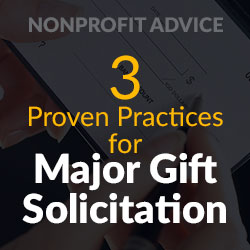 Major gifts are the largest donations a nonprofit receives, excluding the occasional massive planned gift. They are, therefore, incredibly significant. Their acquisition should be approached with serious drive.

Major gifts won’t simply fall into your organization’s lap. Major gift programs require careful cultivation, solicitation, and stewardship. Solicitation, or the act of actually asking for the gift, is greatly affected by not only what occurs in the moment but all the work leading up to that. You can’t solicit gifts without cultivating the prospect first.

This article aims to highlight some necessary steps nonprofits should take prior to and during the ask. Once you’ve used prospect research to highlight your top candidates for major giving, you can implement these strategies to make the most of your time and resources.

1. Cultivate in a variety of ways over an extended period of time.

The process leading up to physically acquiring a major gift is an extensive one. You’ll almost never meet a donor, make a request, and secure a major gift in one session. Instead, you’ll slowly build your relationship up with that donor over time, making the official ask once you have a solid understanding of what size and sort of donation is best suited to your prospect.

Throughout this cultivation period, it helps to diversify how you spend your time developing a rapport with the donor.

Popular choices for long-term cultivation include:

Those four choices cover some of the basics, but the list doesn’t stop there. In addition to these strategies, seek out opportunities for additional interactions that are relevant to your organization’s specific processes and activities.

Your major gift team is going to need a leader. Whether you allocate the time of someone in your office to the role or you hire a brand new employee, appoint someone to take charge of the program.

You’ll need to present an impressive, unified front as you send your fundraisers out to promote and secure major gifts. That cohesion should start at the top of your program with your major gift officer.

Major gift officers organize, coordinate, and head up everything related to major giving for nonprofits and other organizations that need to raise funds.

If your organization is new or smaller and doesn’t have the financial flexibility to hire a major gift officer, don’t let that hold you back from seeking major gifts. Major gift acquisition can help you reach a point where you can hire someone to fill the position.

In the meantime, strategize with your team about how the major gift responsibilities should be allocated across current staff. Even if you can’t hire a major gift officer, that shouldn’t stop you from appointing someone to lead the program.

Major gifts should be a team effort, but every team needs its captain.

3. Paint a complete picture of what a major gift can accomplish.

From a practical standpoint, people will want to know what their money is going toward and predicted to accomplish. You don’t donate a gift as large as a major gift and walk away without asking questions and expecting results.

Have a direct and straightforward conversation with your prospects where you outline how their funds will be spent. Even if you can’t guarantee specifics, you surely can give donors a good idea of what will occur.

Specificity is your friend. Explain:

You can partly explain this in your cultivation meetings, but you’ll also want to make sure you emphasize the key details during your official solicitation.

You’ll have already built up a rapport with your prospect throughout cultivation and part of that relationship building is designed to foster trust when it comes to you stating how the money will be used.

Dealing with sizable sums of money is going to inherently come with complications; there’s going to be a lot at stake. Be transparent about the entire process to put your interested prospects’ minds at ease.

These three practices should get you started, but you’ll want to do some more research before you jump right in. Acquiring major gifts is a comprehensive process that needs proper preparation. You’re on the right track, so stay on it!

Bill Tedesco is a well-known entrepreneur in the field of philanthropy with over 15 years of experience at the helm of companies serving the fundraising profession. He has personally conducted original research to identify markers of philanthropy and has developed modeling and analytical products that use those markers to accurately predict future giving. Since 2007, he’s been the founder, CEO and Managing Partner of DonorSearch. DonorSearch is one of a small group of companies providing wealth screening, philanthropic reviews, and online prospect research tools exclusively to the nonprofit market. Prior to DonorSearch, he was CEO of WealthEngine and Executive Vice President of Target America, which was later purchased by Blackbaud and folded into Blackbaud’s Target Analytics division. Mr. Tedesco was also a principal of BFTConnect/ContactReporter. He also has four years of fundraising experience as Director of Development for the Fund for Educational Excellence, Baltimore’s public education fund, and as a major gift officer at the University Of Maryland School Of Medicine. He earned B.S. and M.P.A. degrees from Pennsylvania State University and is a frequent speaker at conferences around the United States.